What we know about the habits and deep sea migration of pacific salmon is flawed to say the least. Salmon are relatively easy to study at the beginning and end of their amazing life cycle. It is the 1000 or so days in between that we have the hardest time deciphering. Lucky for us the shifting light for global awareness of this remarkable species. New and continued research by marine biologist on both sides of the 49th parallel are leading us towards some answers. 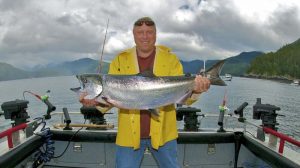 Last November I attended the Sport Fishing Institutes Annual Policy Conference in Vancovuer, B.C. During the sessions of the day I was fortunate enough to hear a talk by Scott Hinch, about just this topic! As an avid fisherman and self appointed life long learner, scientific studies like these are exactly what I love to hear about. I understand this is not everyone’s cup of tea however; the more we know about salmon behavior, the better we can predict mid and early season migration.

All though the Hinch presentation deals with Salmon in the Salish sea, (the origin for some of the salmon we catch off the coast of Haida Gwaii) we have a lot to learn from any study of juvenile salmon. Hinch’s study dealt with V4 tagging fish and then releasing them from a fixed location to monitor the migration and selection through the Discovery Islands.

Some key findings that I take away from reading this study is just how far these fish migrate everyday while on there way to and from the fishing grounds. Tagged salmon moved between 15 to 50 miles per day. That is a long way for a fish that is less than 4 inches, on its way to becoming an adult. As the salmon age and start to return to the spawning grounds we see similar distances on average. Though some species migrate as far as 80 miles per day when making a short run and an average of 25 miles per day when talking about salmon that swim deep into the interior of BC.

What we still don’t have an accurate view of is the depth at which salmon seem to migrate and what conditions cause them to change depth in the water column. The salmon we catch are usually between 45 and 120 feet deep however; Chinook salmon have been observed migrating at depths well beyond 500 feet. The current science leads us to more questions than answers when it comes to how or why so deep but, I do know that I would be excited to haul up a spring salmon from the depths of 300 ft plus.

That is the beauty of our vast fishing grounds in Haida Gwaii. B.C. While the majority of the salmon caught are predominantly in the water near the wall in Cartwright sound. We are learning that the old way is not the only way when it comes to the targeting and catching of west coast pacific salmon.